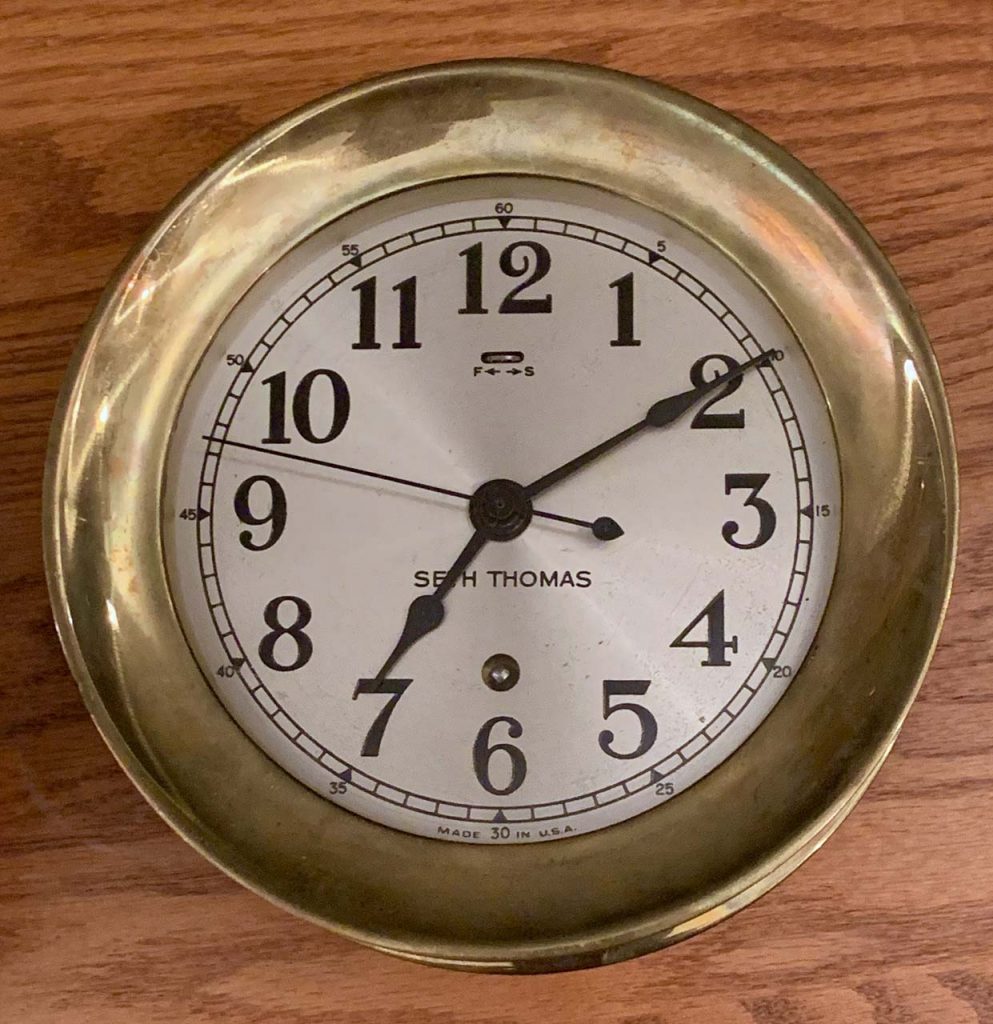 I picked up a non-running World-War II-era Seth Thomas ship’s clock, model 5195. This is a time-only clock in a brass case intended to be mounted on the bulkhead of a ship. As pendulums aren’t much good on the water, this clock has a watch-style escapement. I picked this up from Merritt’s a few months ago while out in Pennsylvania at the NAWCC watch repair class.

Merritt’s had a couple ship’s clocks for sale. The other was running, but in tougher cosmetic condition, and older. This clock looks factory fresh, other than needing a bit of brass polish. I ran through my usual pre-purchase evaluation process, and Merritt’s was kind enough to let me pull the movement out of the can. The clock wasn’t running, but I could see that the balance staff wasn’t broken (it ticked a few times with poor amplitude and then stopped), and it looked like with a normal cleaning procedure the clock should be able to be brought back into working order. I haven’t worked on one of these before, but was reasonably confident that I could get it running, and so chose the one in better cosmetic shape.

The craziness of fall came and has now gone, and after clearing a couple projects off my plate, thought I might take a peek at this and see what could be done. 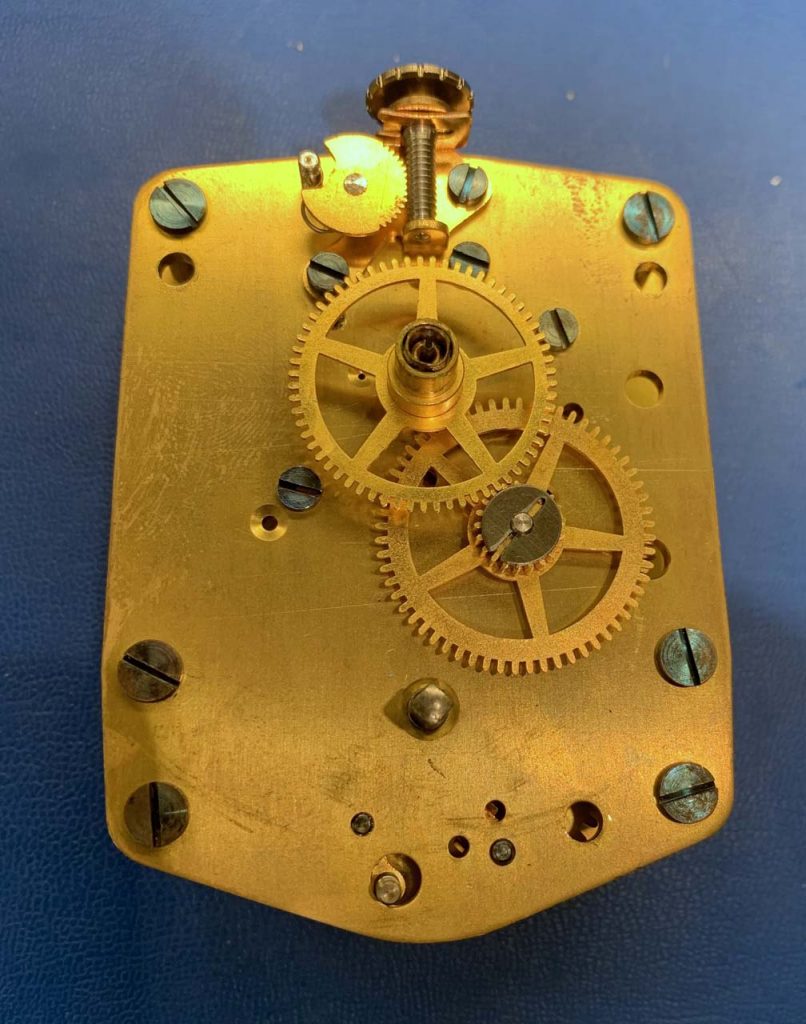 This is a gorgeous movement. Chelsea clocks are all the rage and I have no doubt they are very well made, but I really think Seth Thomas naval clocks are underrated. These clocks have thick plates and an industrial design that just screams quality. The mainspring click has a convenient lever to release the click for service, and everything is modular for easy access and replacement. There’s no decoration on the plates, but other than that, in every way that matters, this is a fine clock. Courtesy of Google Books, I even found the original service manual online. 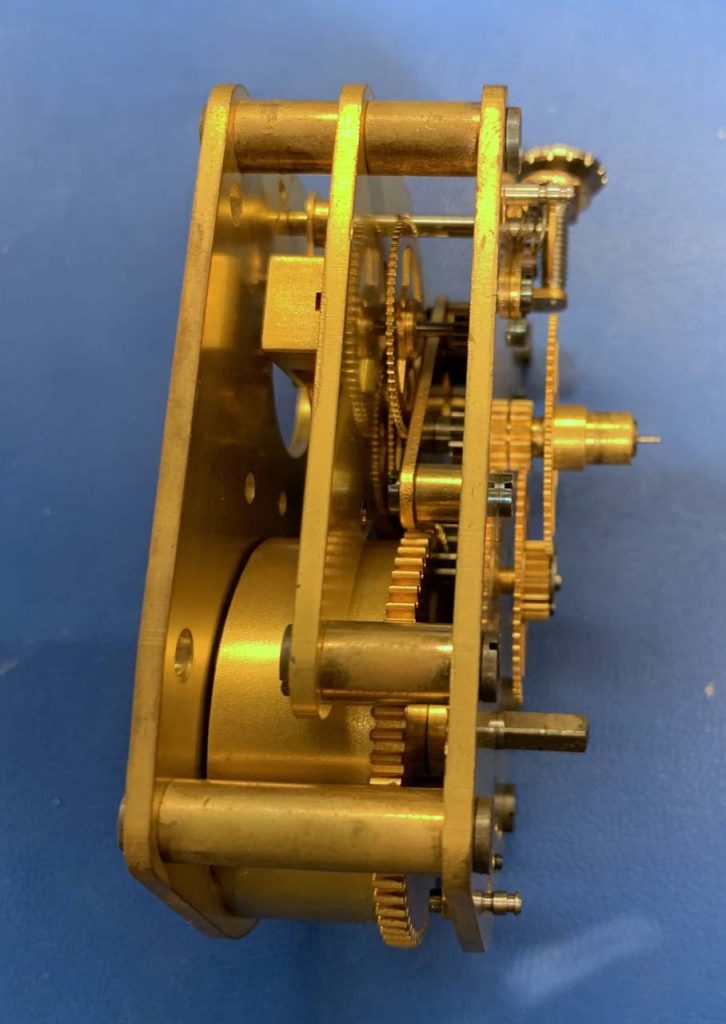 I’m actually telling this story slightly out of order. After removing the bezel from the clock, I popped the second hand off and loosened the nut retaining the minute hand and suddenly the movement was off to the races.  The hour hand was not pressed down far enough and was making contact with the minute hand. There was enough friction that the movement couldn’t overcome it, and the clock wouldn’t run. I pressed the hour hand down a bit farther and put the other hands on, and the clock continued to run. 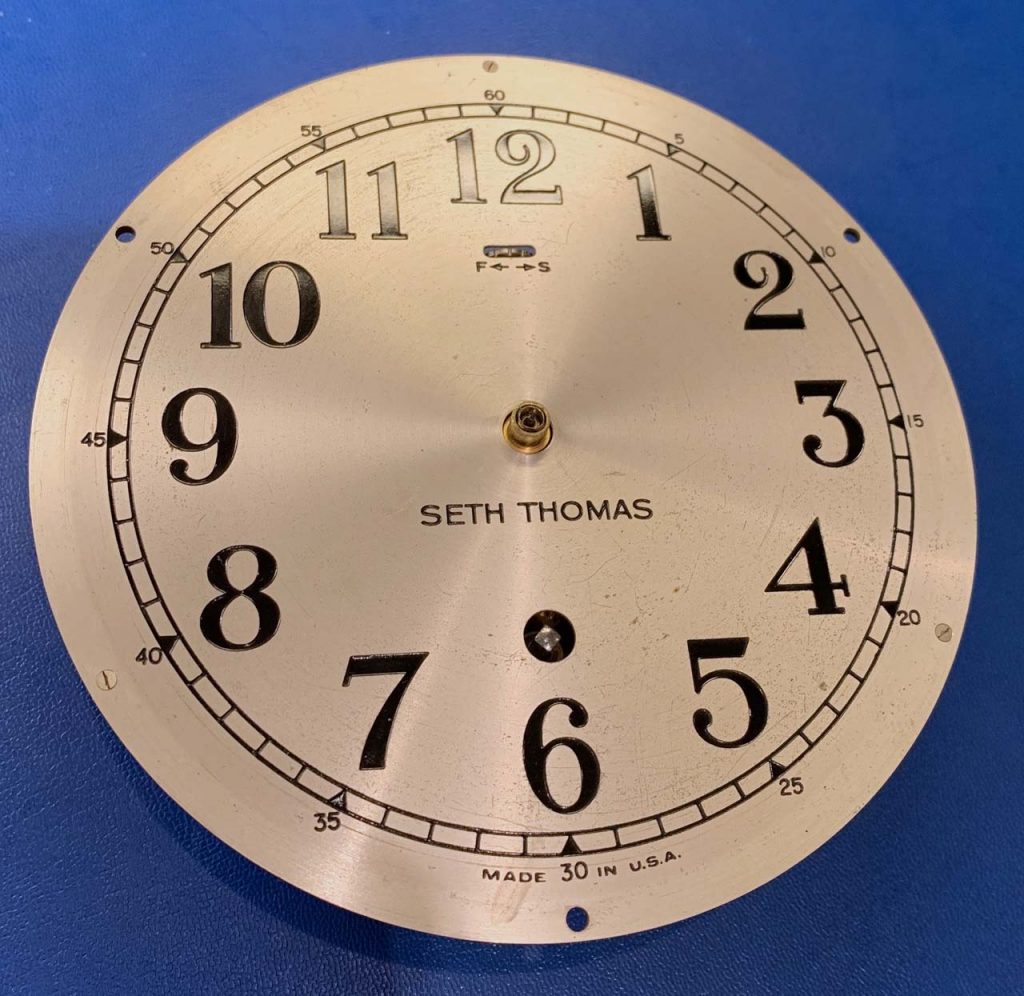 Normally I’m very suspicious of the condition of any clock that I don’t know the history of, but this clock was so clean with oil visible in all the pivots and with great balance amplitude I decided to leave well enough alone.

Normally my repair adventures follow Murphy’s law and I end up spending much more time than I expected to; it was nice to get one that went the other way for a change.