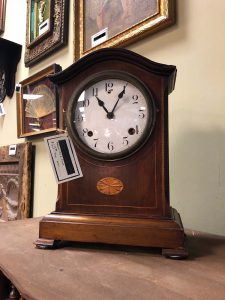 You have your eye on a clock that’s for sale. Maybe it’s at a retail establishment, maybe a garage sale. You give it a look. The case seems decent; all the pieces seem to be there. The seller says “Oh yeah, the clock runs great.” You’re pretty sure the owner would balk at your request to disassemble the clock. How do you know if the clock isn’t hiding some dark secret? How do you decide on a fair price for the clock?

Every collector occasionally overpays for a clock or finds something isn’t as was advertised. This tends to happen more often at the beginning of a collector’s experience; hopefully education reduces the likelihood of overpaying. Here are a few things to check to reduce your odds of feeling buyer’s remorse.

Is the clock complete? Do case details like finials match each other? Do they seem to match the clock? If you know the model of the clock, do internet pictures match the clock you’re looking at?

Has the case been refinished?

In a perfect world, a clock would have its original finish in perfect condition. That’s pretty unlikely, as sunlight, moisture, human touch, and time degrade the finish. Most collectors prefer a clock to retain its original finish and accept that some patina is inevitable and even desirable, though if the finish is in really bad shape, it is probably better if the clock is refinished as long as the refinishing was done well. I am not overly concerned about this – I own clocks that have the original finish and clocks that have been refinished.

Has the dial been replaced/refinished?

Just as cases age, dials can degrade. Painted dials tend to chip. Some patina is acceptable and may even be desirable, however there is a lower tolerance for dial damage than case finish patina. Dials can be professionally repaired or repainted by someone like the Dial House or they can be replaced with a paper dial. A professionally repainted dial looks great. Paper dials are better than an illegible dial, but not as good as a repainted dial.

The running condition of a clock can be challenging to evaluate without opening the clock, but there are a few clues.

The first thing I do when looking at a clock is to start the pendulum. I do this before attempting to wind the clock – I want to see the condition of the clock when I walked up to it. There are three possibilities – either the clock starts ticking and keeps running, it starts ticking but only runs for a short time before stopping, or it doesn’t tick at all. If the clock runs and keeps running, I will stall for time by shopping somewhere else in the store, chat up the seller, or whatever I can do to let some time elapse to see if the clock will keep running.

Checking If The Clock Is In Beat

Pendulum-driven clocks are sensitive to the angle the verge makes with the escape wheel. A clock that is in beat makes an even tick tock sound, with the same amount of time for the “tick” as for the “tock”. If the clock’s ticking is uneven, then the clock is out of beat. Clocks that are out of beat run poorly or not at all. Beat adjustment is not too difficult, but depending on the type of clock, may not be a good idea to attempt on a clock you don’t own. For the purpose of evaluating a clock for purchase, you may be able to tip the clock slightly to one side or the other to improve the beat of the clock. If the clock comes into beat by temporarily tilting the clock, then the beat issue can be corrected and shouldn’t be considered a negative issue for the clock you are considering.

I will next wind the clock, counting how many times I turned the key. While winding the time side, I will watch the hands of the clock. For many clocks, there is typically some backward movement of the hands as winding the clock is essentially a force that runs the clock backward during each turn. If the minute hand jumps back a minute or so or less, the clock is probably not too worn. If the minute hand jumps back more than a minute, the clock will likely need more service than a simple cleaning, including at least some bushings. If you don’t notice any movement of the hands when winding, then this test is not applicable to this particular clock.

Most clock movements take around 14 half-turns to run for a week. If the clock was unwound when you found it and it takes at least 14 half-turns to fully wind, you can tell that the clock ran for at least a week before stopping. This is a good sign. If the clock was fully wound or mostly wound (it only took a few key turns to wind) when you found it, either the pendulum had been manually stopped by the seller, or the clock isn’t running and needs at least a cleaning.

Now that you have at least a few clues to the condition of the movement, should you buy the clock? How do you arrive at a fair price?

An antique anything is by definition a used item, so its physical and running condition isn’t going to be perfect (unless you’re purchasing a fully-serviced clock). The best way to evaluate the price of a clock is through experience and comparison to other similar clocks. Fully-serviced clocks will cost significantly more than unserviced clocks, as overhauling a movement is a labor-intensive process. Private auction houses are often the cheapest source of clocks and watches, but it’s difficult to inspect a clock hundreds of miles from where you live, so there is risk that needs to be factored into the low price. Clocks that you can see and inspect in person reduce your risk significantly, but you may pay for that privilege, especially if you are purchasing from a clock dealer that sells serviced clocks.

While my personal opinion is that desirable antique clocks will appreciate in value over the long-term (10+ years or more), it’s probably not a good idea to consider a clock an “investment”. With the realistic view that you’re buying a hobby object and not an investment and with the knowledge that nearly every clock you will see should probably be serviced which adds a couple hundred dollars to the total price of the clock, you can buy it if you like it, or not. Right now we are experiencing a buyer’s market for clocks and antiques in general, and there’s a lot of supply out there. There are good clocks available for half the price or less than they were 15 years ago. On one hand, now is a great time to buy; on the other hand, if there’s something not quite right with the clock you are looking at, there will always be another clock.