Antique clocks and watches are fascinating to me. I love the mechanical art and science that took hundreds of years to develop, the craftsmanship required to make a working clock, the astonishing accuracy of even relatively low-grade clocks, the physical beauty, and the history of a piece. I love imagining who carried a pocket watch around for all their life, and what stories were told below the mantle clock that sat above the fireplace for five generations. 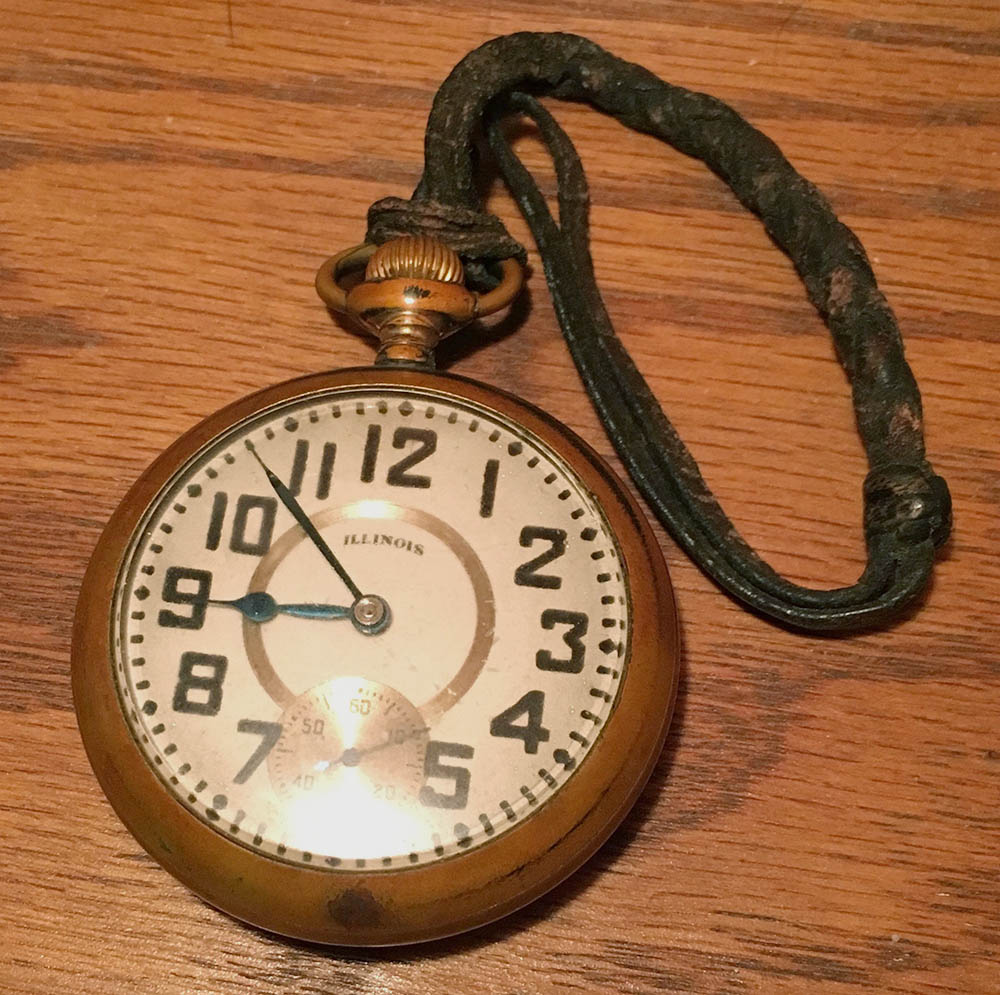 Some of my favorite pieces are the ones I know the provenance of. My most precious timepiece is my Great Grandpa Joe’s Illinois Bunn Special. This watch dates to 1907. Joe was born in 1895, meaning that either he was a very precocious and affluent twelve year old, or more probably that he bought the watch used later in life. 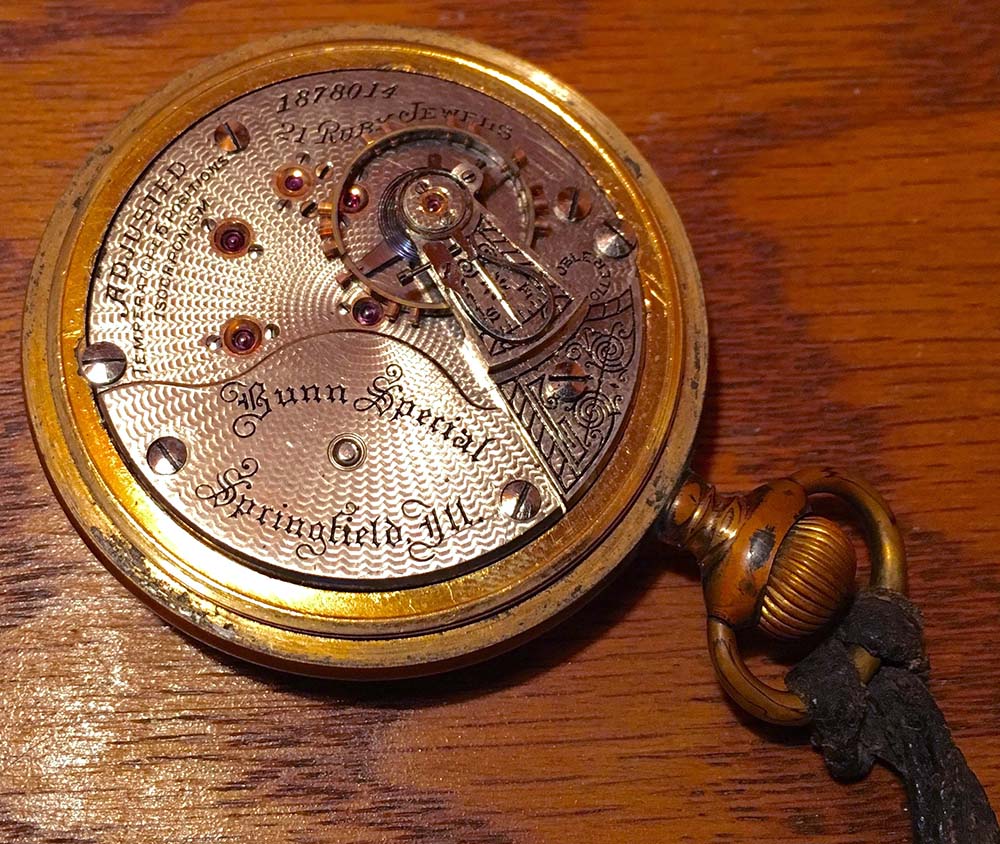 The Illinois Bunn Special is an extremely high-quality railroad-grade watch. They are worth more today than the average watch from Hamilton, Hampden, Waltham, or Elgin (though all of those names have special pieces, too), and are a beautifully decorated full-plate movement. That’s not what I love about Great Grand Dad’s watch, though. 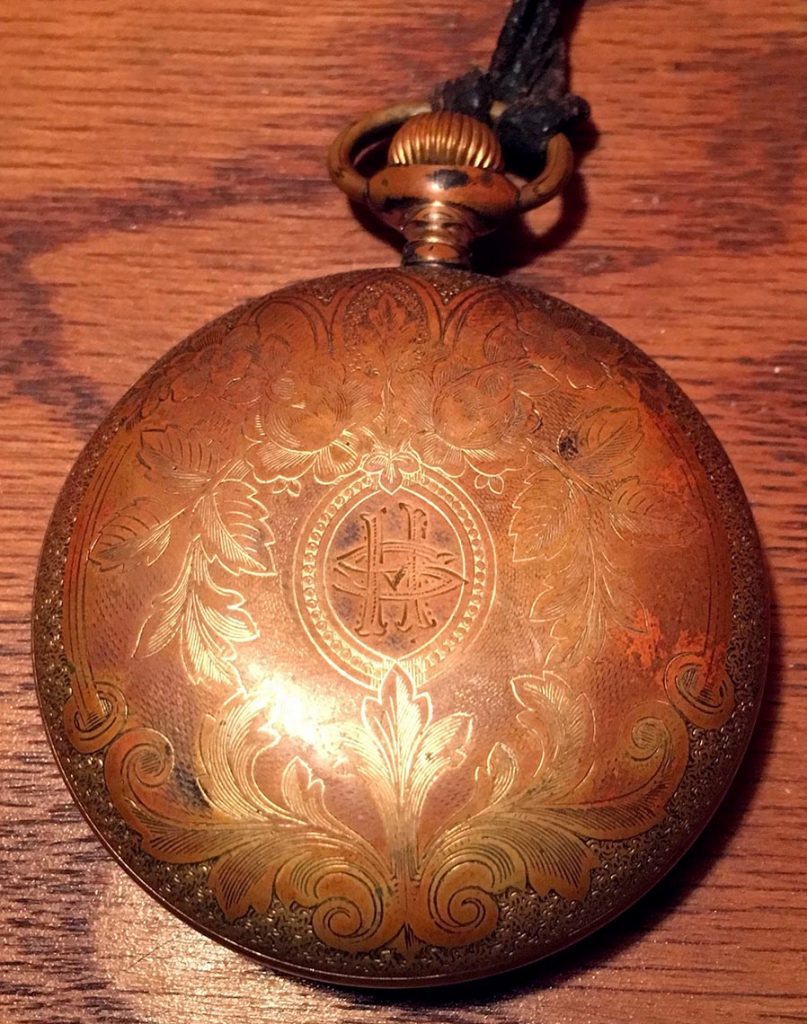 I love the fact that this watch was so well-loved that it was carried until nearly all of the gold was worn off the case. I love that when the original enamel dial was damaged at some point, instead of replacing the whole watch with something newer and cheaper, Joe replaced the dial with what he could afford to keep his precious timepiece running – an Art Deco-style metal dial that dates probably from the 1930’s. 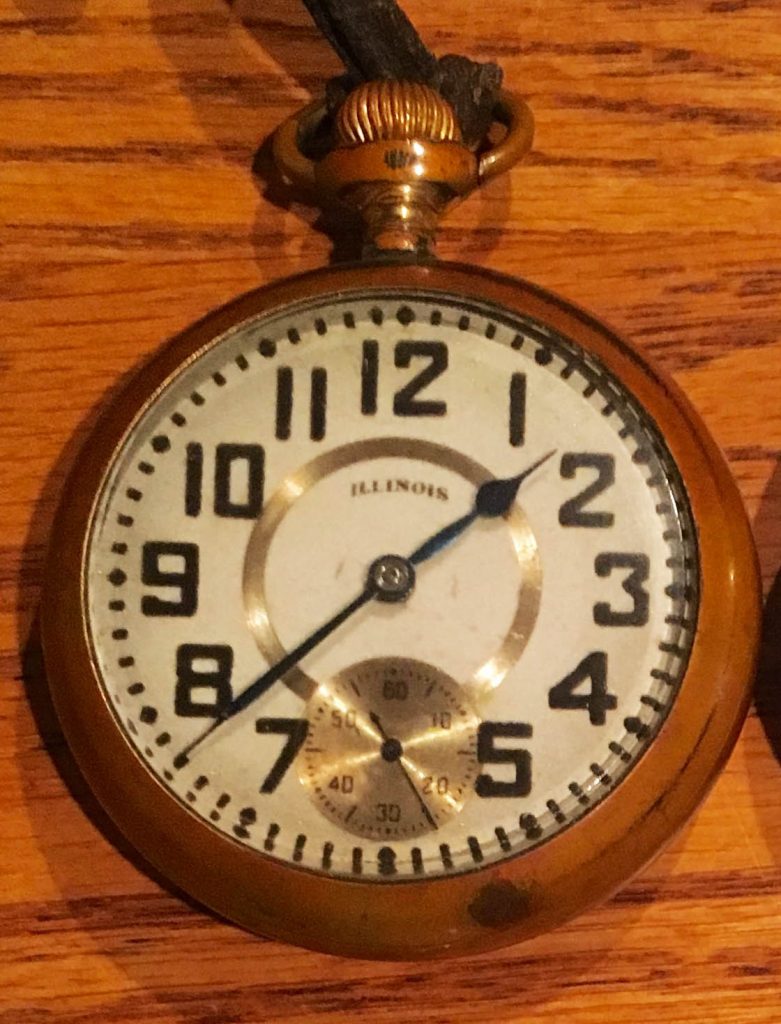 Joseph Pearson was a Swedish immigrant. Grandpa Joe came to America via England and the story goes that he was supposed to have sailed on the Titanic, but was delayed and took a later voyage. He was drafted into the American army in 1918 and served as a private in World War I. He received his US citizenship sometime after the war. 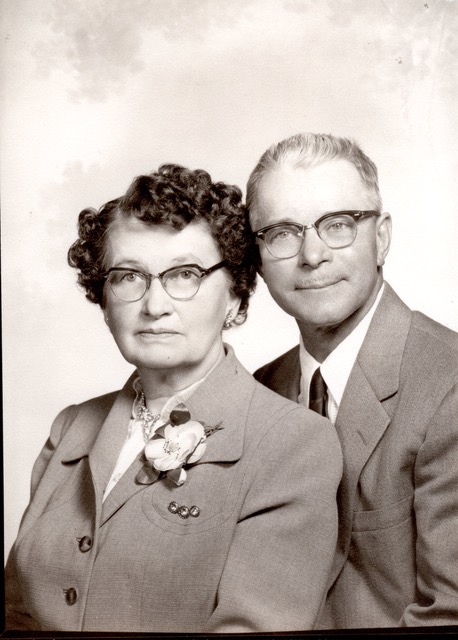 Grandpa Joe was a carpenter by trade. He married my great grandmother Hulda Anderson in 1953, his second wife. Joe and Hulda were both widowed with a total of eleven children between them from their first marriages. At 5′ 4″ he wasn’t a very big man on the outside but made up for it in personality. He and Hulda loved dancing and they had a wonderful marriage. He passed away in 1972 after an automobile accident. Hulda gave Joe’s watch to my mom shortly after his death.

Joe wasn’t a railroad man and so didn’t need a watch of this grade, but he valued having a quality timepiece enough to make a financial sacrifice. When new, Grandpa Joe’s watch cost around $100 in 1907 money. That translates to nearly $3000 in today’s dollars.

I never met Great Grandpa Joe, he died several years before I was born, but I knew of him and I was reminded of him every time I saw the watch hanging on the wall as a kid. My mom said it would someday be mine – when I turned 18. This was really exciting for a couple reasons – in a way it was an incentive to grow up, and it spoke to the value of the piece – that I had to mature before I was worthy to be the next caregiver.

My mom was good to her word and the day came when she entrusted a special family artifact to me. It’s not the most monetarily valuable piece I own. It’s definitely not the prettiest, but I’ll never sell it.