I received this poster in a batch of clock and watch related stuff I purchased last year. The poster shows a beautiful and complicated IWC Da Vinci Perpetual Calendar Chronograph Moonphase watch. Based on the date on the watch face, the poster is circa 2000.

The current model is a bargain at only $40,000 USD or so for the stainless steel version (precious metals versions are up from there), and as the poster clearly states, is for men only; women need not apply. The target audience is apparently further limited to men married to perpetually unreliable and/or tardy women. Or maybe not – the poster seems to indicate that all women are unreliable, and that dropping $40K is a completely justifiable compensation so as to have ‘at least something in my life that keeps time’.

As I mentioned above, I think this watch is very classy looking (even if the makers were boorish at the time) and other than the fact that I’m about $39,500 short, could totally see myself wearing this watch.

The base movement is the venerable ETA 7750 – a movement I like very much. Here is my very well-loved Hamilton Khaki Chronograph from about 2006 using the 7750. You can see the similarities to the IWC in terms of some basic layout elements. 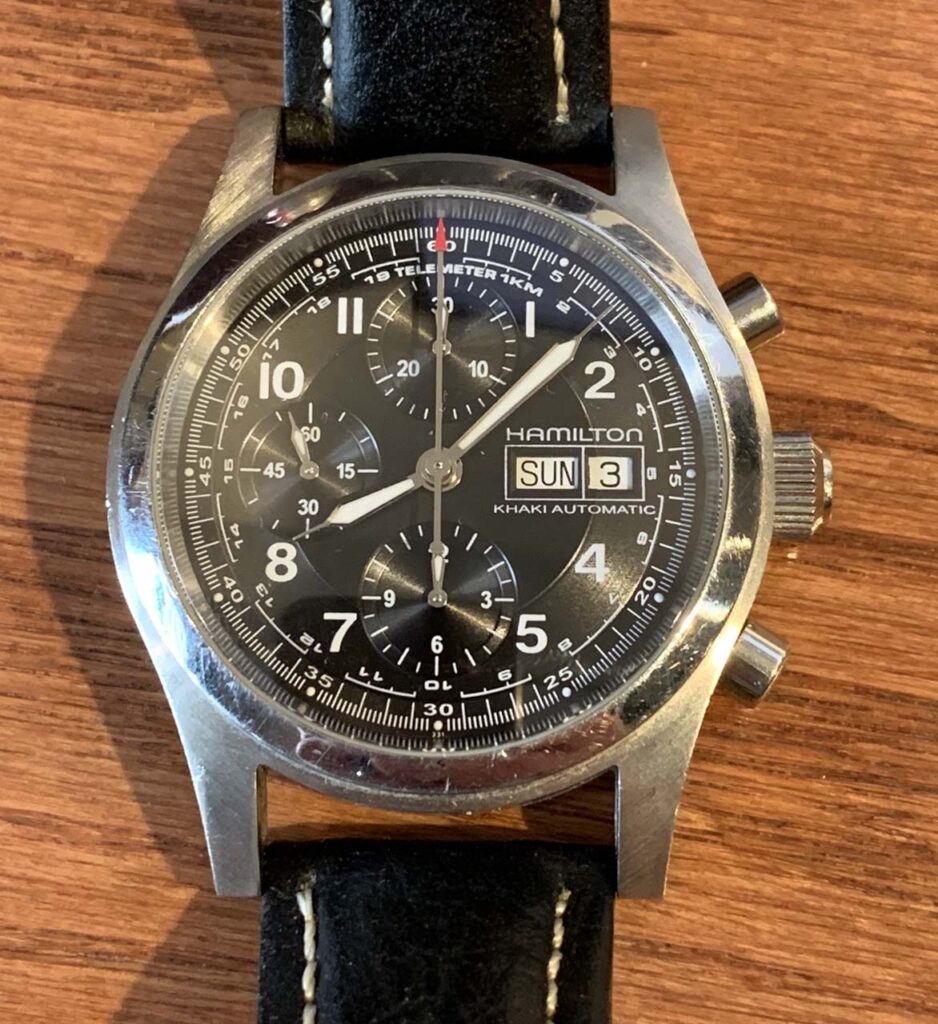 IWC has done what is very common in the modern watch industry – take a meat and potatoes workhorse movement and then modify it.

Aside – There is a lot of creative interpretation about whether a watch is powered by an “in-house” movement or not. Some firms like Rolex and Zenith scratch-build everything (I know Rolex is 100% in-house; Zenith may have some models based on 3rd-party movements but they definitely have their own designs including the El Primero), while others change basically nothing and are essentially case makers. Whether or not that makes any difference in the watch’s absolute performance is debatable; a Toyota Camry is arguably a superior car to a Jaguar for far less money, but if you’re the kind of person with $40K floating around, I’m sure you will find whatever justification you need to pull the trigger.

In this case, IWC has done extensive modifications to the point that it bears only a passing resemblance to it’s raw form, and IWC has dubbed it their Calibre 89000.

You will see from the rest of my site that my interest is primarily in horological things pre-1950. I own one relatively expensive modern watch – a Zenith El Primero Moonphase which I purchased pre-marriage and pre-children. It’s a beautiful watch, and in many ways very like this IWC, so it’s not much of a surprise that I find the IWC attractive, but lack of means as well as lots of opportunity to pick up unique old stuff relatively inexpensively means I will likely never own anything like this.

As a lover of anachronistic things and the owner of more of them than any reasonable person should possess, I hesitate to pass judgment on someone else’s passion or the direction their disposable income takes, but I admit I have to hold my nose on some of the prices of the super high-end modern watch world and the marketing gymnastics makers have to perform to attempt to separate well-heeled potential customers from their money. We always knew that sex sells; in this case, IWC took a shot to see if sexism sold.

Before anyone jumps on me, I write this from a position of amusement, not anger. The world was very different twenty years ago. Relative to the behavior in some of the early James Bond films 30 (or now 40 – yikes) years before that, this poster is quite tame. That said, while the watch in this poster may keep accurate time, the poster itself hasn’t stood the test of time as well as the watch likely has.