Most of my repair work has been on smaller pieces, but I’ve done a few full-sized clocks lately, and have needed something more convenient to rig and test movements in process. Previously I set them back up in the case, which creates challenges accessing the back of the movement.

I got some ideas from looking at other commercially available stands and then hit the scrap bin.  These aren’t rocket science, and I have a substantial pile of odds and ends from previous projects to make use of. We’re still under Coronavirus lockdown, so I wanted to see how little extra I had to procure to make this happen.

The frame is pretty simple –  2 x 4 verticals and 1/2″ plywood cross members on the top and bottom. The width of the stand is pretty arbitrary – I settled on 20″ wide which should cover pretty much everything. The depth is more critical – it needs to be narrow enough to not get in the way of the hands in front and the pendulum in back. I cut down the sides of the 2 x 4 verticals to 2″, giving a 2″ gap between the cross members and about 3″ total depth.

I cut the legs out on my CNC router and added a couple of leveling feet.

I have been learning many things in my horological pursuits these last few years. I’m not new to building things, and I’m blessed to have a fairly well-equipped, if small, shop. One thing I wasn’t expecting to learn was to navigate the challenge of having good mess-free photography of shop projects in a working shop that is, well, a bit messy. I don’t think my shop is any messier than the typical shop, but the normal workings of making things – tools and project bits – tend to stay out on surfaces while the project is underway. This isn’t a huge problem for pictures of small items – it’s easy to frame the camera shot around the sawdust or tools, but larger projects like the stand require a shot with a wider field of view, which in the case of the center photo below, includes the open door on one of my benches revealing my high-tech cardboard box holding my shop rags. Conveniently cropped out of the frame on top of the bench is the half-reassembled remote control car I was epoxying back together for my son.

While the basic stand is straightforward,  the movement mount took a little more thought. It needs to be able to accommodate a wide range of sizes. Back to the CNC router, I cut a couple dog bones that can slide to handle whatever size movement I’m working on. 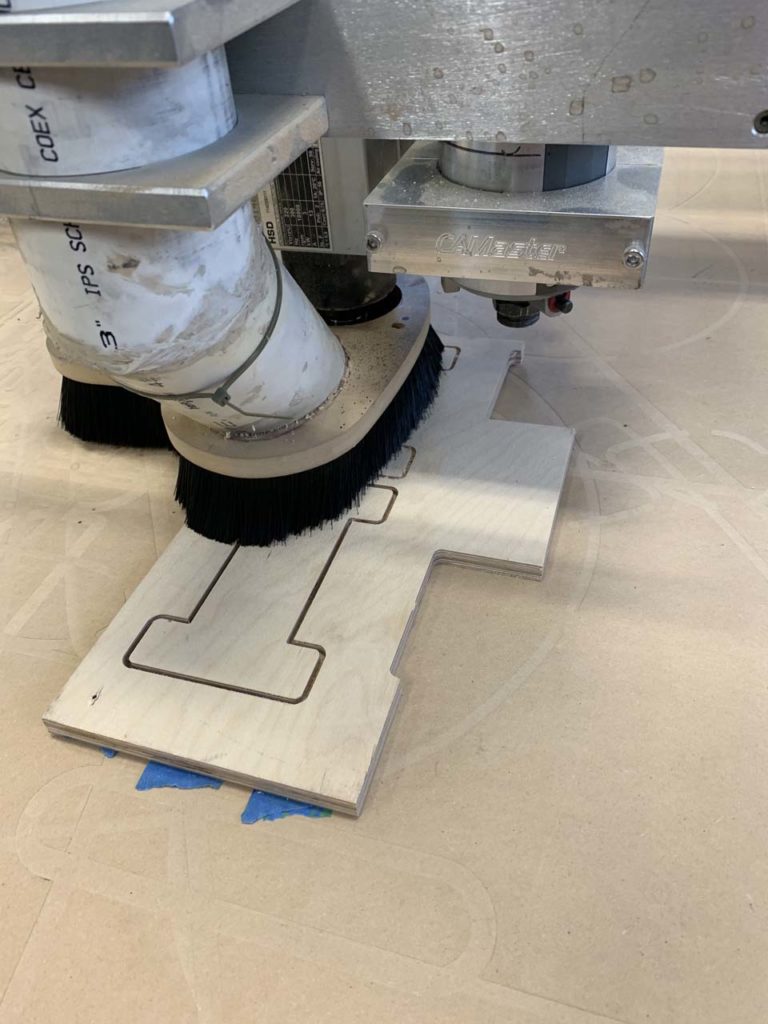 I made a couple long J bolts by threading a piece of 3/16″ zinc plated steel rod. Please excuse the crudity of the J bend – I don’t own a metal bending jig and made them with a vise and a couple pairs of pliers. I threaded the rod by putting the rod in a drill chuck in my mill and holding the thread die. The machine did the turning, I just held on. 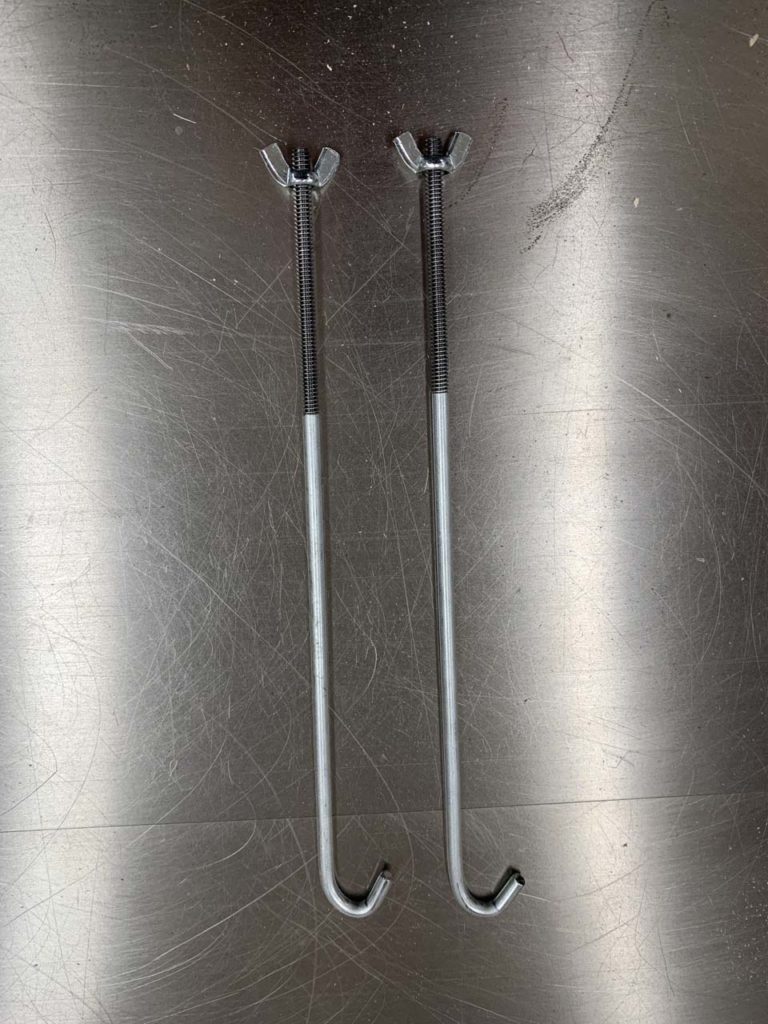 The J hooks attach to the stand dog bones with a pair of angle pieces. I milled a slot in the top piece to allow for some positional adjustment, as some movement pillars have decoration or other obstructions that wouldn’t be able to be worked around with a straight up and down clamp arrangement.

The rods are long enough so the clamps can be tightened at the bottom of the dog bones which is easier to access than trying to reach between the stand cross members. 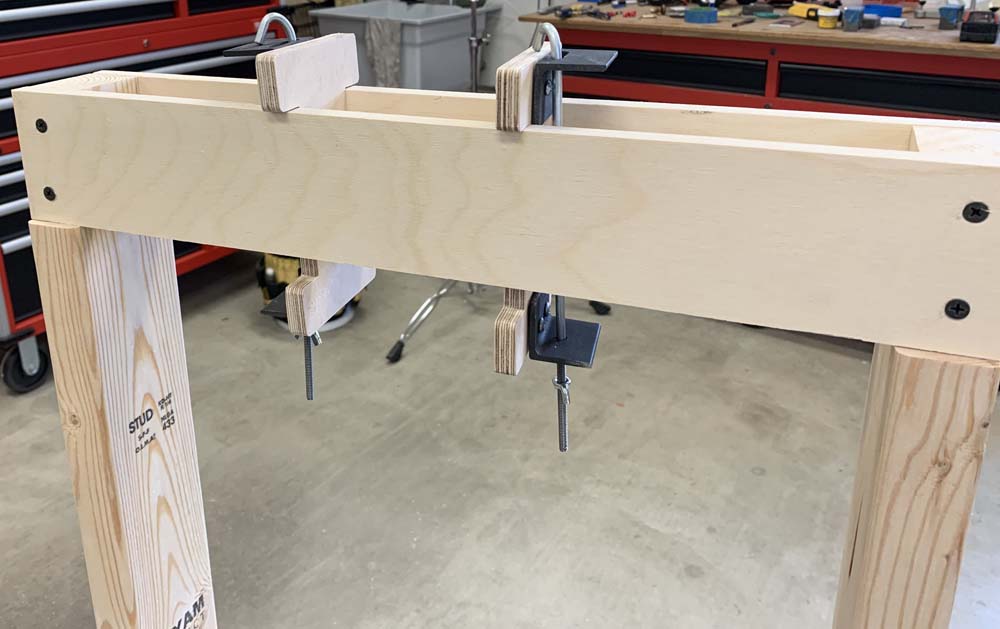 On the stand is a tall case movement from the first half of the 18th century – possibly 1725 or so. The open design of the stand allows the free end of the weight cord to be moved around for clearance. 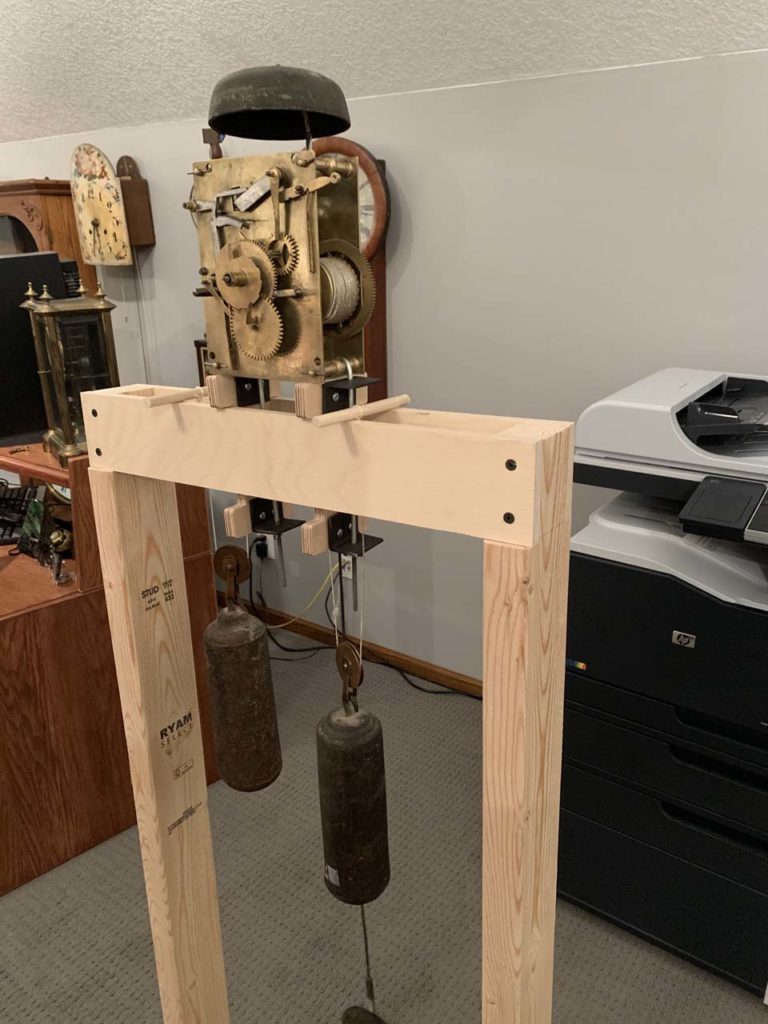 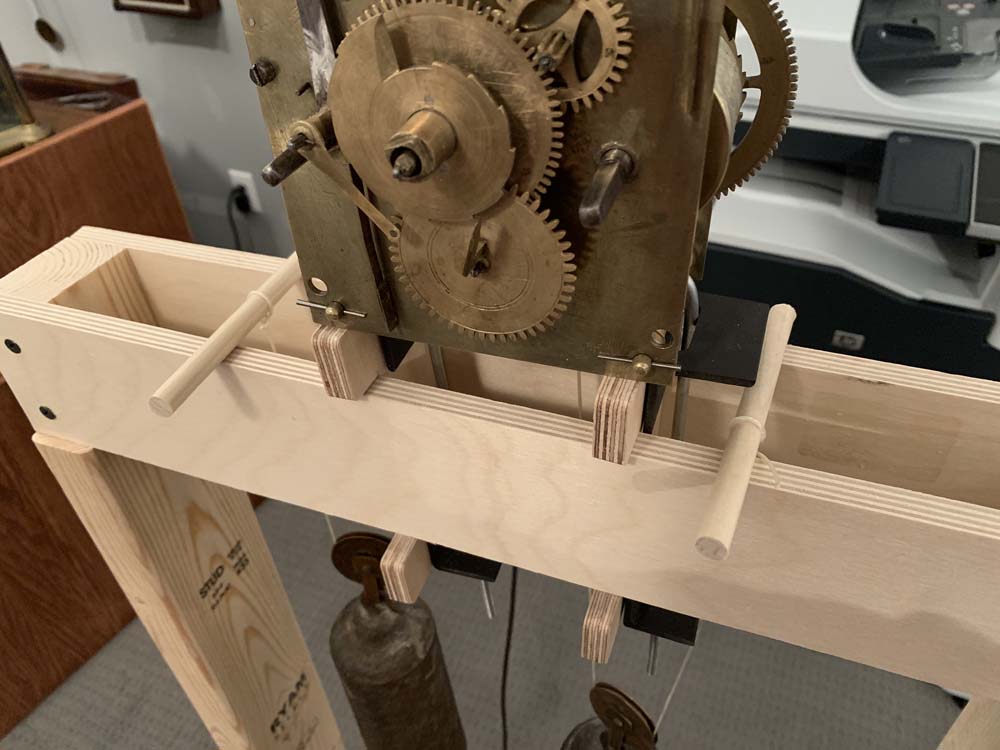 This is an interesting and very old movement. In addition to the usual counting of the hours on the bell, this clock strikes the half hour as well. The date is shown through an aperture on the dial, driven by the gear at the bottom front of the movement with a metal flag sticking out. More on this fascinating clock soon!